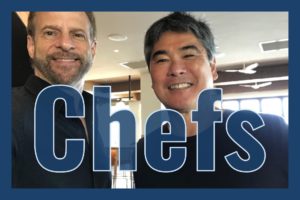 In today’s episode, Andy and Melissa dive a little deeper into Chef Roy Yamaguchi’s interview on The Wedding Biz. Roy is our first Chef to appear on the show and he really brought the value.

In this episode we discuss:

On today’s episode, Andy shares with us the honor of sitting down with renowned chef Roy Yamaguchi, as he shares his story. Roy shares his experiences from coming to the United States for the first time to attend culinary school, starting his first restaurant in Los Angeles, and finally creating Roy’s in Hawaii.

Listen in as Roy shares with Andy, as well as the rest of us, his passion, his mission, and his hopes for the future.

In today’s conversation, Andy talks with Ashfer Biju, the executive chef and food and beverage director at the iconic The Pierre, A Taj Hotel in New York City, responsible for all things culinary. To Ashfer, however, he’s more than his official job title; he’s a self-proclaimed “crafter of perishable art.”

After growing up in a small fishing town in India, Ashfer discovered his passion for food as a child and was driven to share his love with others ever since. With his entire family working in the restaurant industry in some fashion, Ashfer quickly dove into the hospitality industry and helped launch a vegetarian restaurant in India when he was only 18. He studied hospitality and pursued a degree at the Culinary Institute of America in Napa Valley, California. Soon after, Ashfer traveled to open restaurants around the world, from Berkeley to Mauritius and the Maldives. By 2009, when he had already opened numerous hotels and restaurants, the time for Ashfer to move to New York City had come.

Not surprisingly, Manhattan ended up being far more than the mere short-term piece of a working travel circuit as he’d expected; Ashfer found his calling in what he considers one of the three “maximum food cities” of New York, London, and Hong Kong. Extending beyond his current work at The Pierre, Ashfer and Andy delve into the “extreme form of art” that is food, the importance of food’s personalization in weddings, why food is an experience at heart, and even why turmeric is “the next kale.”

After their conversation, Andy had the opportunity to experience Ashfer’s food firsthand through a tasting at Perrine in The Pierre. Read about his experience below the links.

“Following the interview, Ashfer was kind enough to offer me a multi-course tasting in The Pierre’s onsite restaurant, Perrine. The setting, it provided, was a perfect location for such a culinary endeavor. I proceeded to be served seven different dishes and I had to fight hard not to consume every drop and morsel in order to save room for it all! Each dish was presented beautifully, as shown in the pics, and I had to take a moment with each one just to take in the visual aspect.”

Read Andy’s comments on each dish by clicking on each photo in the gallery.